Edinburgh, the capital city of Scotland, is located in northern United Kingdom. This unique city is packed with extraordinary sceneries and is filled with rich histories; thus, should be regarded as one of the most beautiful gems of entire European continent. From the top of Calton hill, an unfinished national monument, tourists will be able to cherish the glamouring landscape of the entire city. Tourists could also blend in with the distinctive cultures of Scottish people such as the famous Scottish outfit and the famous sound of Scottish horns along the Royal Miles Road, located in Old Town. Towards the end of the day, tourists could enjoy local beverages at the prominent pub, the Devil’s Advocate. With all these charismatic attributes, it is hard to denial that Edinburgh is one of the most alluring cities in the world.

I personally believe that greed is the source of all suffering. We have desire to acquire, and when we fail to reach that objective, we suffer. Though the sense of belonging in the human-nature is extremely strong, attachment to something or someone could also bring suffering. When things do not go the way we wish, or someone you loves doesn’t love you back, that always bring about great suffering.

Although there are no definite solution to approach the problem of suffering, the idea of karma could be the key to helping us deal with how we view suffering. If karma is a cosmic laws that says we get serve what we deserve, we all will try to approach things differently: better. For me, I will do good things and hope that it will come back to me eventually. Though it doesn’t come up in an obvious way, at least it gives me something to look forward to.

We, as a good global citizen, should not only acknowledge the holocaust, but we should also learn from the holocaust- an event where millions of people were killed, solely because their religious belief and race. Killing is by far the most inhumane action we can do to another human being, despite any reasons to back it up. There are many genocides that happened in the previous 100 years, and that is up to us to stop this crime against humanity.

What can we do to prevent this from happening again. First, I think we should attempt to understand the mindset of leaders like Hitler, and from there, we can convince others that these kind of mindset will not benefit anyone. In addition, we could spread awareness through social media. Lastly, we can start with ourselve. How will treat others will surely reflect who we are and how we think of the holocaust. 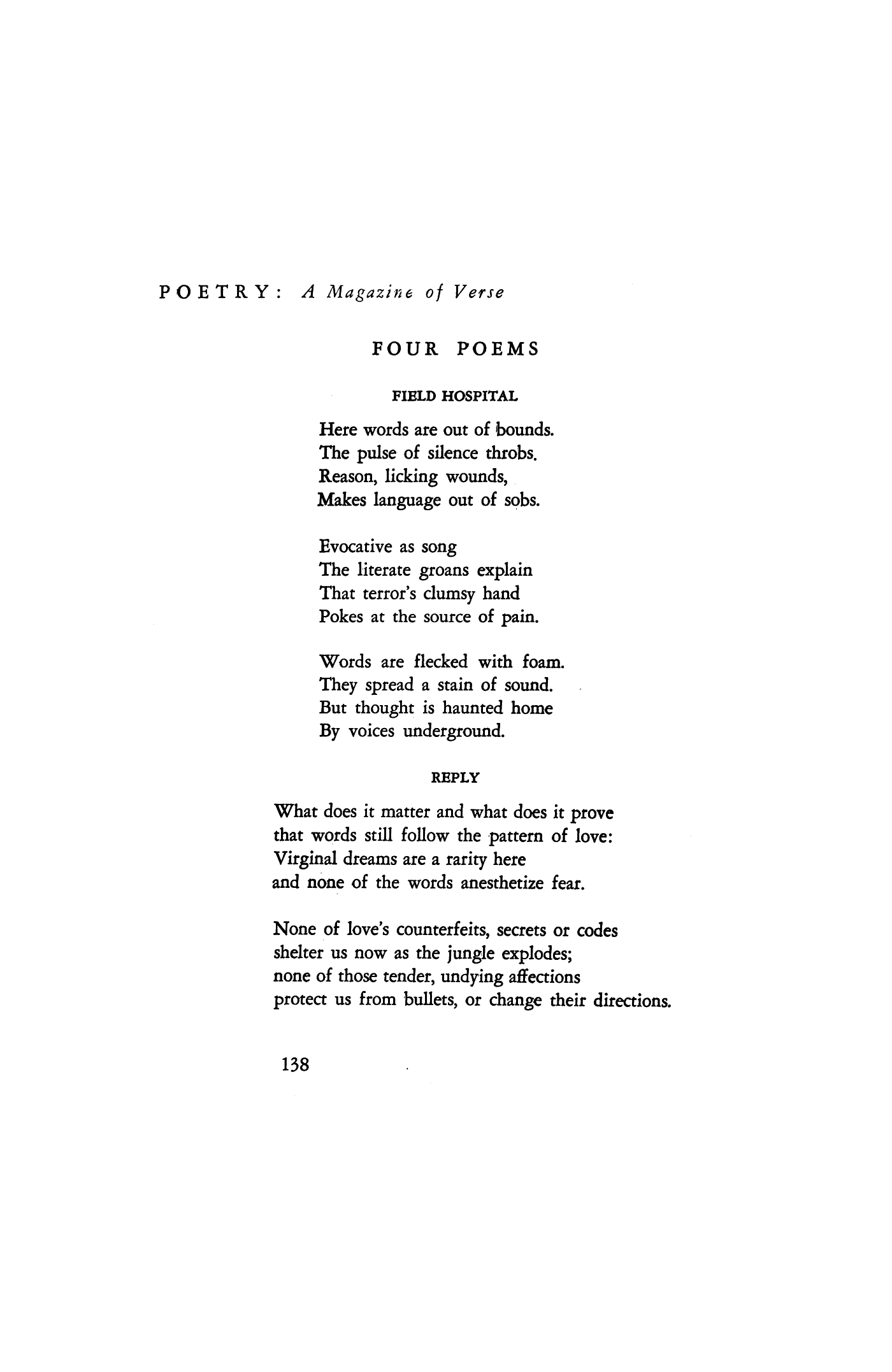 I strongly believe that the author of “Field Hospital” intends to describe the horrifying scenes in the nursing camp during the World War. In the poem, it is clearly portrayed that the soldiers were severely injured. In addition, the author mentions how they painfully screams while laying on the bedsheet of the camp. The overall tone of the poem is quite scary, as it is described as the “haunted home”. This is a great representation of World War II: there’s no peace, just death.

This poem implies that during war, there’s no peace and only suffering. People who serves for their country get served the worst moments in their life. Not only did they have to be apart from their family, they also have to suffer severe injuries or even death. I feel like the author would like to mention how we shouldn’t use war to make peace, but we should make peace to end war.

Personally, the poem crealy present how War is a tragedy and that it only harm the people involved. If the goal of war is to make peace, we should attempt to seek it through peace as well.In this case, people suffers from injuries from bombs, guns, and fighting. The nurse camp is always busy, and people is coming in all the time. If the war continue, there will only be more pain and injuries.

I strongly believe that the world would be a better place without dictatorship. People who govern their citizens by using violence is not the ideal way to go because the people don’t respect them, but it’s more like fear.

We should approach dictatorship like it is not acceptable; thus, we should seek aids from other nation to put pressure on them. We should even protest and do everything in our power to get rid of the corrupted government.

Democracy, commonly practiced in modern countries, is the only way to go. The people will get freedom to choose their leaders, and they will have power over the government. I strongly believe that this should be practiced more.